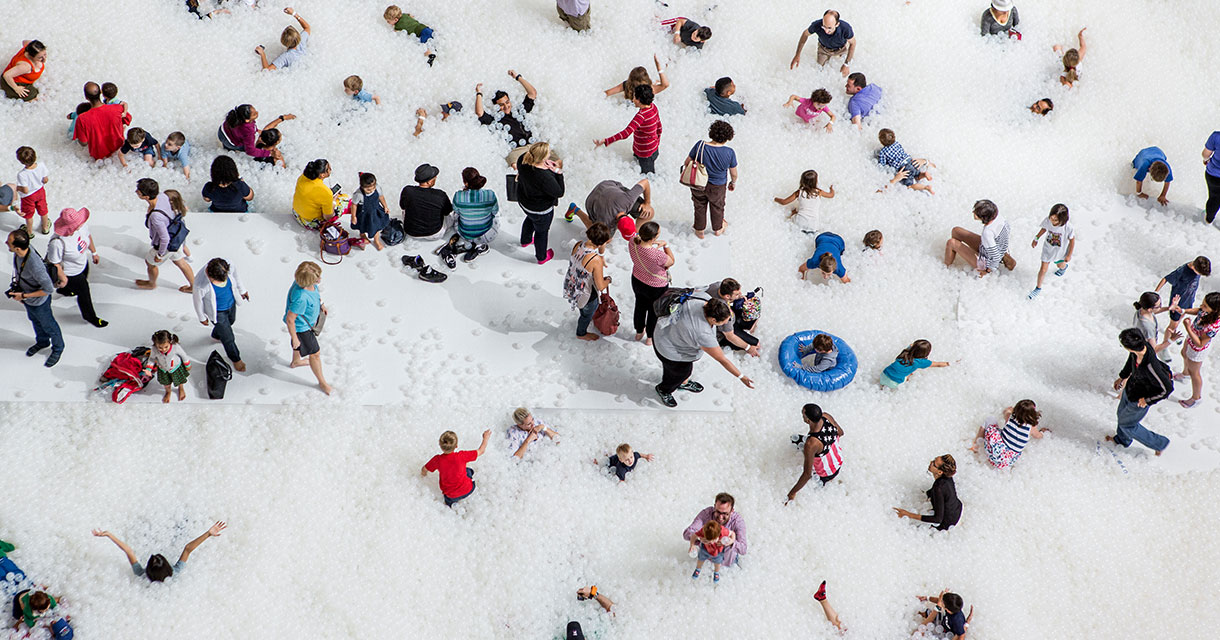 Want to Draw a Crowd? Give People Something To Photograph!

Social media has changed a lot about how we live and share experiences with others. In the last few years, a growing number of temporary and permanent Instagram Museums have sprung up all over the country. Designed to be photographed, these quirky and interactive experiences use compelling themes, eye-catching design, and novel staging to win the hearts (and follows!) of Instagrammers.

Even the most stately and subdued of locations have discovered the benefits of courting the snap-happy set. Take the National Building Museum in Washington D.C., which teaches the history of construction and urban planning (not exactly topics known to thrill). It shattered attendance records in 2015 with an event called The BEACH that transformed its main hall into a playpen filled with 750,000 white plastic balls.

Who knew that all it took was a ball pit to get people out of their homes and into the world?

1. The Museum of Ice Cream

Debuting in the summer of 2016, the Museum of Ice Cream (MOIC) is often credited as being the originator of the current crop of photo-friendly venues. Parsons School of Design alum Maryellis Bunn and former Wall Street analyst Manish Vora came up with the idea for a fun and colorful experience centered around everyone’s favorite frozen treat.

The installation includes an animal cracker carousel, a bar swing shaped like an ice cream sandwich, and instead of a ball pit, a sprinkle pool, filled to the brim with the colorful candy topping. The founders have since expanded the MOIC to Los Angeles, San Francisco, and Miami. 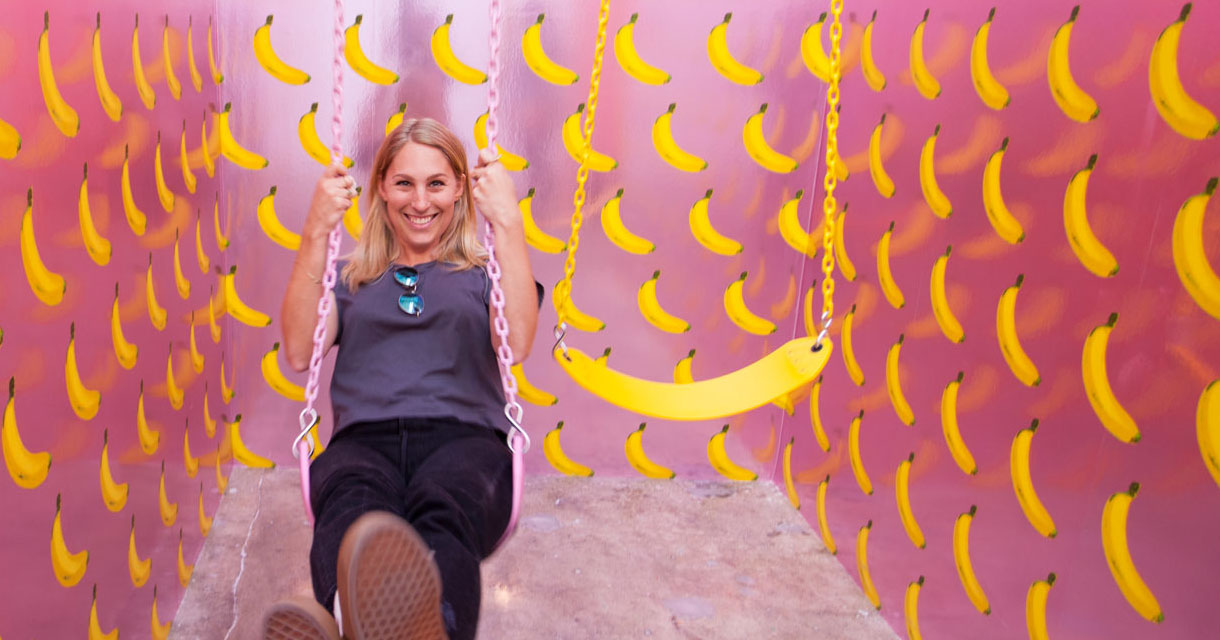 While the MOIC is perhaps the biggest name in venues built for Instagram, it wasn’t technically the first. That honor goes to 29Rooms, a pop-up event created in 2015 by lifestyle website Refinery29 to celebrate its 10th anniversary. 29 elaborately decorated rooms were intended to wow a select guest list of influencers and shine a spotlight on artists that promote positive social change.

However, the experience was so popular that it has been adapted into a touring event that runs for several days in various cities around the country. Corporate sponsors, including Dunkin’, Aldo, and the Bravo cable network, provide support for branded rooms, and several big-name celebrities, such as Jake Gyllenhaal, Jessica Alba, and Janelle Monáe, contributed design input.

3. The Museum of Illusions

Hollywood has been using in-camera tricks like forced perspective to fool the eye pretty much since the dawn of film. Starting in early 2018, the Museum of Illusions has been employing these classic techniques for a new audience.

Attendees line up to have their picture taken in front of eye-popping murals that make it appear like they are climbing a precarious mountain, standing on the edge of a high rise balcony, or staring down a giant meteor.

4. The Museum of Selfies

The current craze for taking a photo of yourself might seem like a product of the smartphone era, but according to the Museum of Selfies, people have been making records of their own image for over 40,000 years, beginning with hand stencils in an Indonesian cave.

This museum doesn’t just recount the history of selfies, though. It creates spaces to create them like Instagrammable backdrops that simulate floating in outer space, sitting on the Iron Throne from “Game of Thrones” (only this one is made of selfie sticks instead of swords), and standing atop a skyscraper. Other attractions include a 90-foot selfie stick and a narcissist survey that describes unfortunate individuals who have perished in pursuit of the perfect selfie. 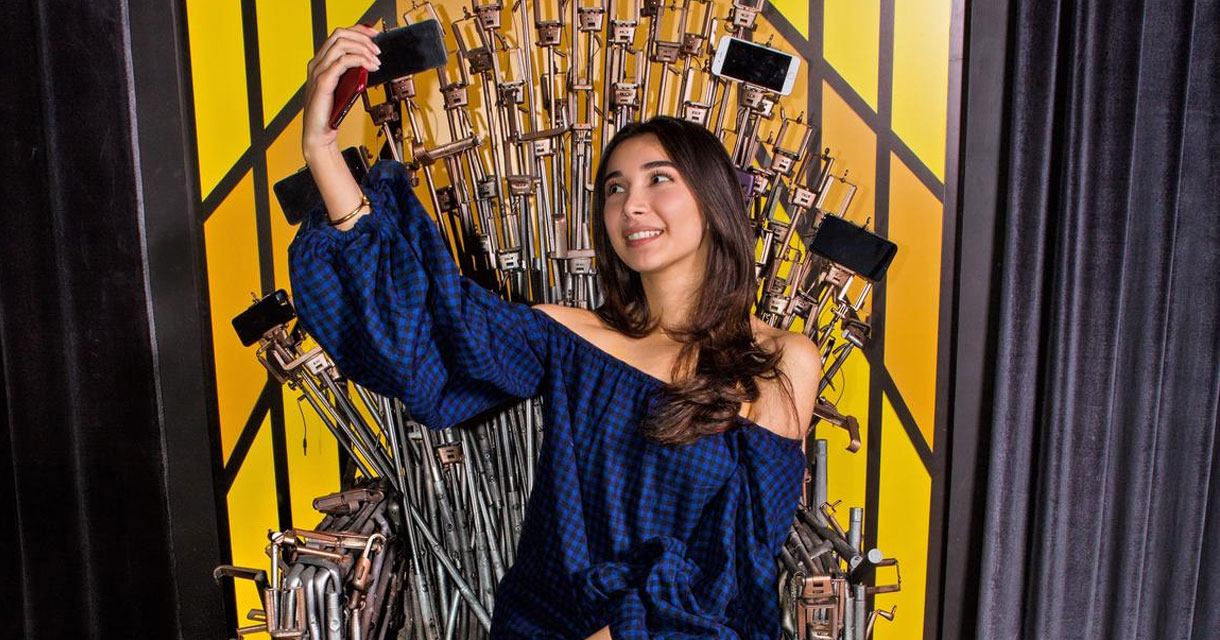 In 2017, blogger Jordan Ferney, artist Leah Rosenberg, and designer Erin Jang decided that while pizza, candy, rosé wine, and smiley faces (all themes of Instagram museums) are delightful and make interesting subjects for photos, what really makes a snap shine are bright and beautiful colors.

The Color Factory offers all the hues of the rainbow in a variety of backdrops in 17 rooms festooned with ribbons, illuminated by stained glass, and positively overflowing with inflatable fun provided by Geronimo Balloons. And so that visitors never have to worry about getting the perfect shot of themselves romping among 200,000 yellow orbs in their ball pit, an in-house camera is suspended from the ceiling to capture hard to get angles.

Ice cream is a treat, but everyone knows that cute animal pictures have built-in virality. Trends come and go on the web, but fluffy critters always get shared by the millions. It was with that fact in mind — and the intention of giving homes to a few lovable pups — that Human’s Best Friend created an eight-room mansion devoted to dogs.

Giant toilet bowls, a “Lady & the Tramp”-style spaghetti dinner, glittering bones hung from the ceiling, and, of course, the obligatory ball pit (courtesy of pet supply brand Petmate) make up an indoor playground for pets and their owners. Up to 12 dogs at a time are permitted in the museum for 30 to 45 minutes, and for humans without a furry best friend, local shelters make dogs available for adoption right on site. 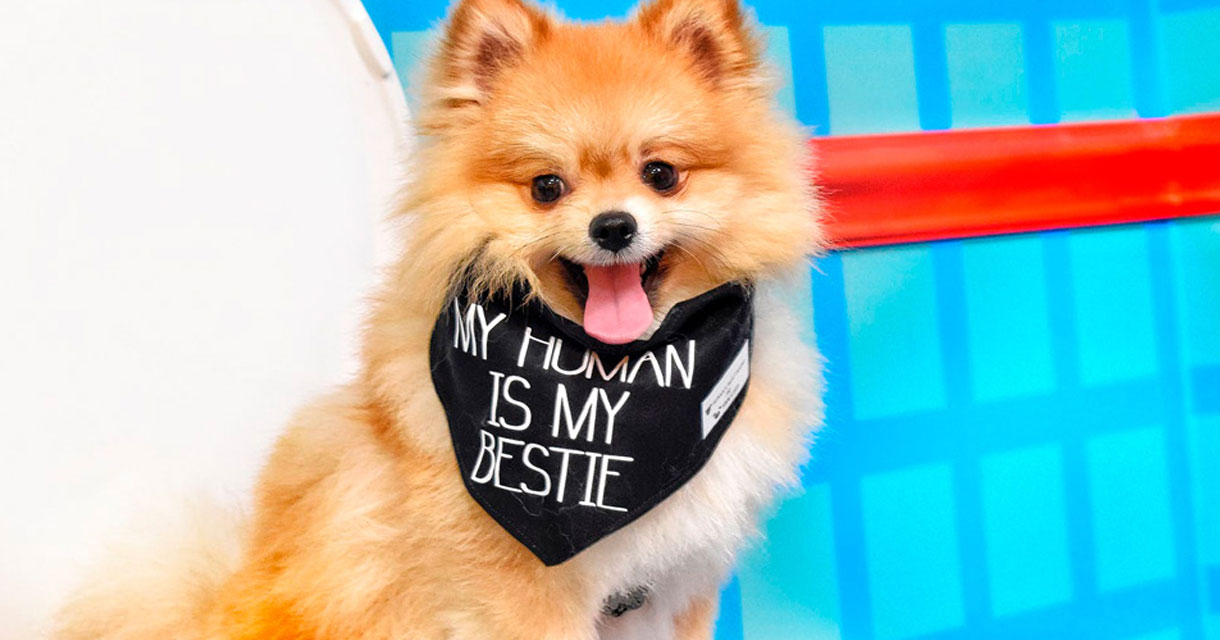 Disneyland might bill itself as “The Happiest Place On Earth” but a roving pop-up called the Happy Place, which premiered in L.A. in 2017 and is currently open in Boston is also branding itself as a temple of positive vibes.

Inside you’ll find things like an upside-down bedroom, a golden bathroom chock full of rubber ducks, a double rainbow you can slide down into a pot of oversized coins, and the piece de resistance, the world’s largest indoor confetti dome, where you can snap selfies amid 500,000 pieces of technicolor paper fun. 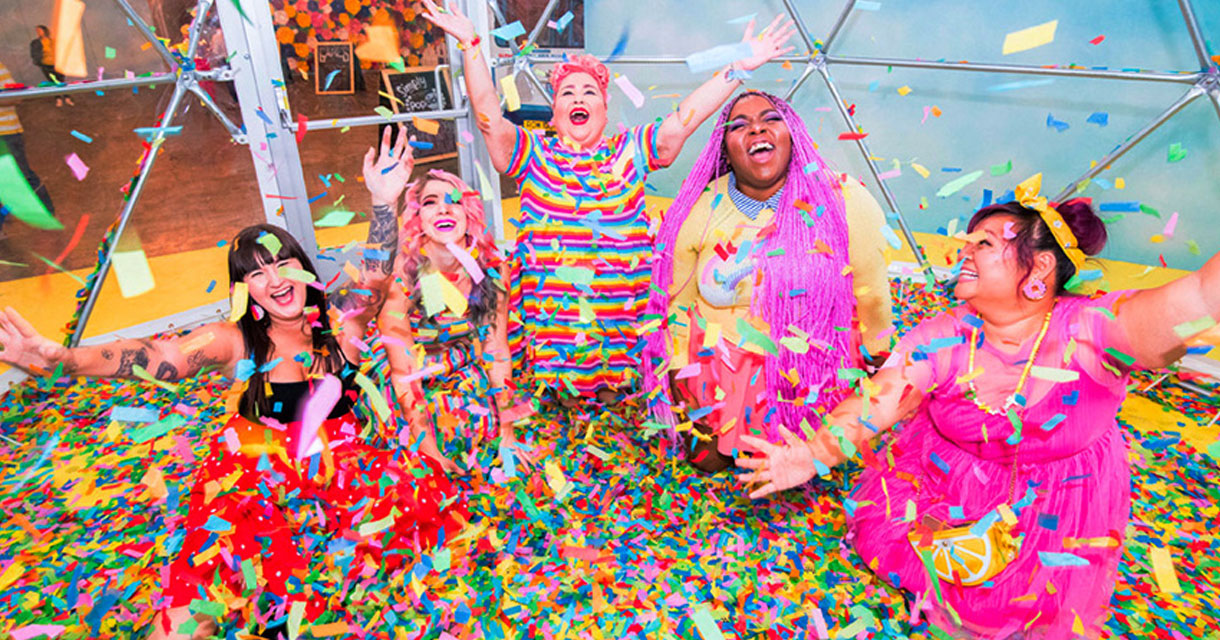 Ice cream, rainbows, and puppies look to be just the first round of installations designed with Instagram and social media in mind.

These museums are proving to throngs of sightseers, motivated to ‘do it for the Gram,’ that viewing artifacts, artworks, and exhibits in person is not only more engaging than merely watching clips of them on YouTube, but trekking out into the real world earns them coveted bragging rights on social media.

Planning your next Instagrammable experience?