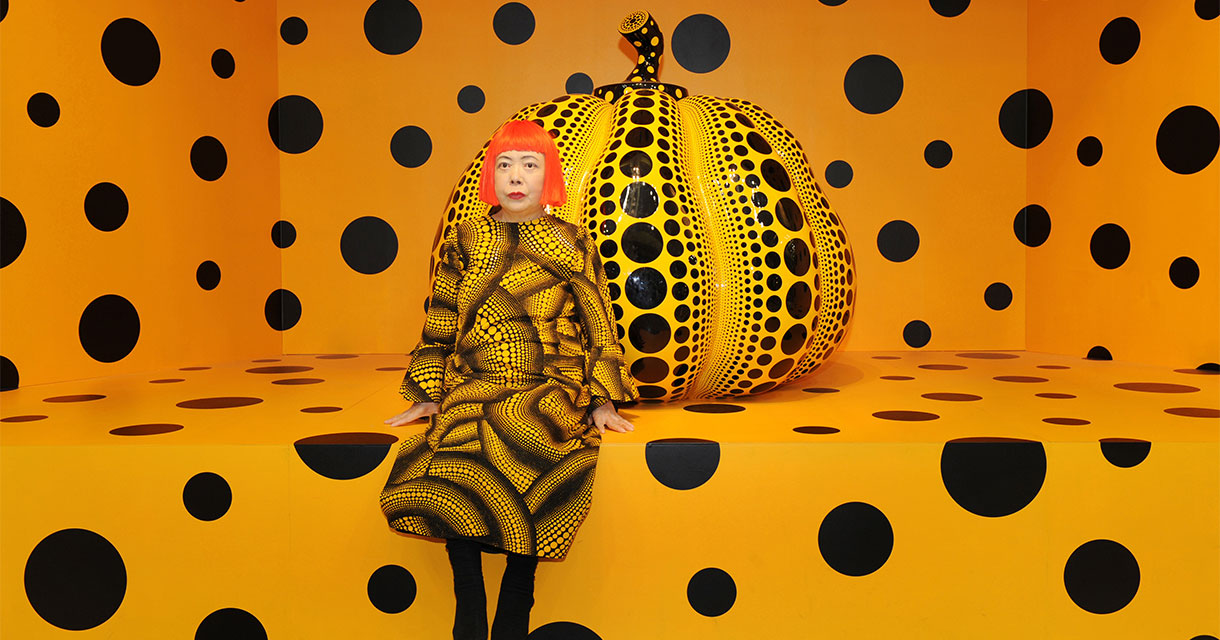 Some people just take longer to hit their stride.

Julia Child was in her 50s before she rose to culinary stardom. Winston Churchill lost every election he ever ran in until he became Great Britain’s Prime Minister at age 62.

Japanese artist Yayoi Kusama (pronounced “yah-YOY koo-SAH-ma”) might get the record for the latest bloomer of all time. She was in her 80’s before the world finally took notice of her genius and unique voice.

But, now, in the clearest possible sign that she has crossed over from underappreciated outsider artist to universally-beloved and recognized media darling, the now 90-year-old Japanese sculptor is getting her own balloon, called “Love Flies Up to the Sky,” at this year’s Macy’s Thanksgiving Day Parade.

After all, an award-winning documentary film cataloging her life, sold-out shows at museums around the world, and even a perennially trending hashtag on Instagram are all positive indicators of her growing influence, but nothing quite compares to one of her polka-dotted creations scaled up to 34-feet tall and floating aside cultural icons like Snoopy, Spongebob, and Ronald McDonald.

Kusama is seemingly everywhere these days. Starting in May, her work will take over the New York Botanical Garden for six months. “Kusama: Cosmic Nature” will feature both old and new sculptures placed amid the 250-acre grounds in the Bronx.

Also in NY, her latest Infinity Room (mirrored halls filled with glowing objects that reflect endlessly) was unveiled at the David Zwirner Gallery in Chelsea for a show called “Every Day I Pray for Love.” If you’re hoping to be among the hordes of people lining up for a peek, wear comfortable shoes because the average wait time for her exhibits is over two hours.

Maybe it’s the art world finally acknowledging her singular talent, or maybe it’s experience-hungry Millennials and Gen Zers desperate to capture the perfect shot for the ‘gram,’ but one thing is clear: Kusama’s art and ethos are resonating all over the world right now. 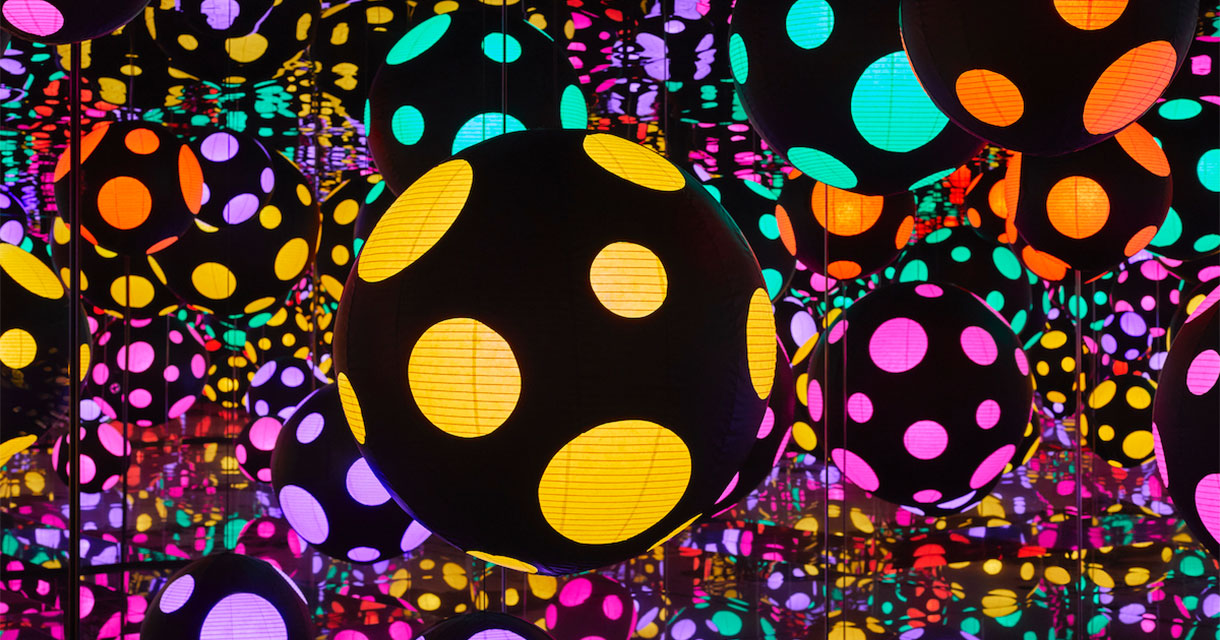 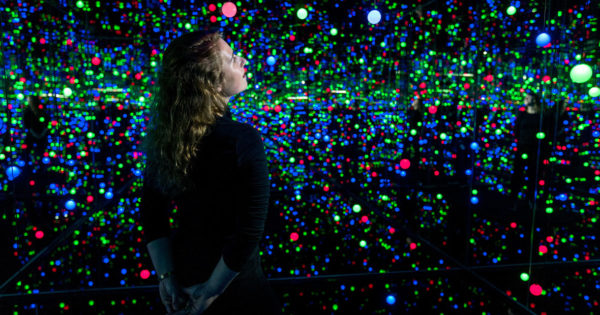 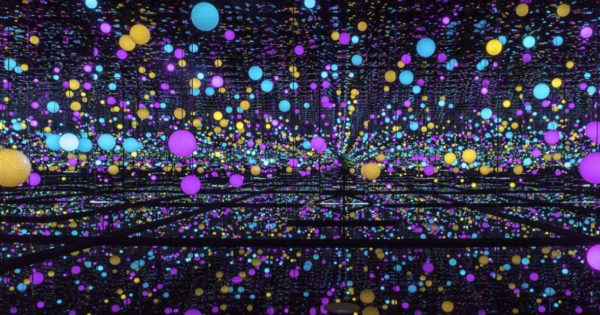 Though she is perhaps best known for her sculptures and installations, Yayoi Kusama has produced work in a wide array of media, from performance art to painting to fashion, poetry, and literary fiction.

Some art is meant to be seen, some heard, but some touch every sense and can only be described as an experience, and Kusama is the very definition of an experiential artist. In the 1960s she organized theatrical ‘happenings’ to protest the Vietnam War; she painted naked bodies in her signature polka dots and wrote an open letter to President Richard Nixon offering to have sex with him if he would end the war.

Critics describe her oeuvre as intrinsically conceptual, meaning the underlying ideas take precedence over aesthetics. Themes of feminism, sexuality, minimalism, and surrealism, as well as ideas related to mental health, are deeply imbued in her creations.

Mental health, in particular, is an issue close to Kusama. She has famously lived, by choice, in a psychiatric asylum in Tokyo since the 1970s. Her Infinity Rooms and spotted paintings and sculptures are said to be recreations of the “flashes of light, auras, or dense fields of dots” that she experiences as vivid hallucinations.

Kusama has said that when these visions hit her it seems like an infinite array of shapes and colors are multiplying and overwhelming her senses, a feeling she calls “self-obliteration.” She used that idea to underpin an interactive experience called the “Obliteration Room” where visitors were invited to cover a plain white room with brightly colored polka dot stickers. It didn’t take long before her blank canvas was transformed into an explosion of color.

Art writers, such as Bedatri Choudhury, have argued that her work is an attempt to control time and space externally in a way that she is unable to inside her own mind, a form of self-directed art therapy. Kusama herself has stated that art saved her from suicide more than once.

The Growing Appeal of Authenticity

Kusama has also become well known for the use of pumpkins in her work. In 1993, she filled one of her trademark mirror rooms with small pumpkin sculptures at the Venice Biennale. The exhibit was a smash hit and she has continued to produce a wide range of pumpkins of all sizes. Some say she was drawn to large orange gourds because they somewhat resemble her trademark bright red bob hairstyle.

In 2017, her show at the Hirshhorn Museum, a Smithsonian sculpture garden in Washington D.C., “All the Eternal Love I Have for the Pumpkins,” broke visitor records. The exhibit room averaged over 8,000 guests a day. Allison Peck, a spokesperson for the museum, said the Hirshorn “has never had a show with that kind of visitor demand.” 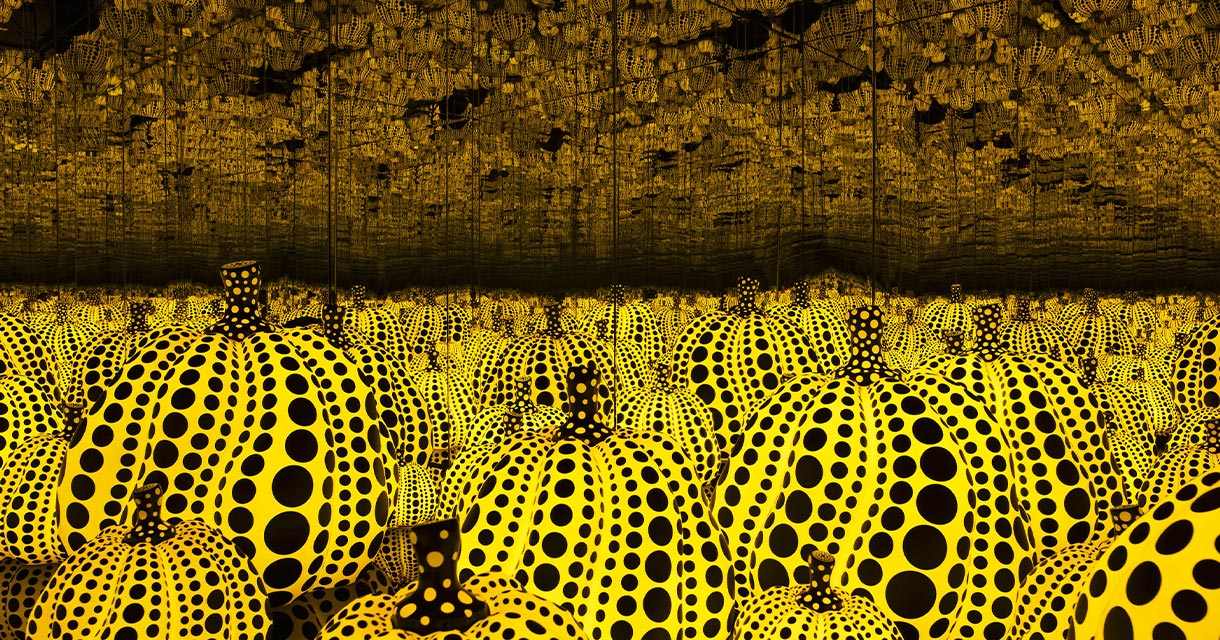 More than just a delight for the senses.

Kusama’s installations are so revered because of the palpable connection to her inner life they represent.

“These rooms reflect all of her elements: her obsessions, her accumulations, her infinite repetitions. And it’s all very bodily and immersive,”

Kusama’s unflinchingly honest and true to her values work is a perfect fit in our current age, where authenticity is prized (even fetishized).

After decades of obscurity, being copied by lesser artists, and struggling with her inner demons, the art world has finally caught onto Yayoi Kusama’s heroic, revolutionary, and utterly personal body of work, and there is no question, we are all richer for it.

At FG|PG, we are true believers in the power of art, design, and technology to immerse, amaze, and connect people.

Get in touch today how we can elevate your next experience.