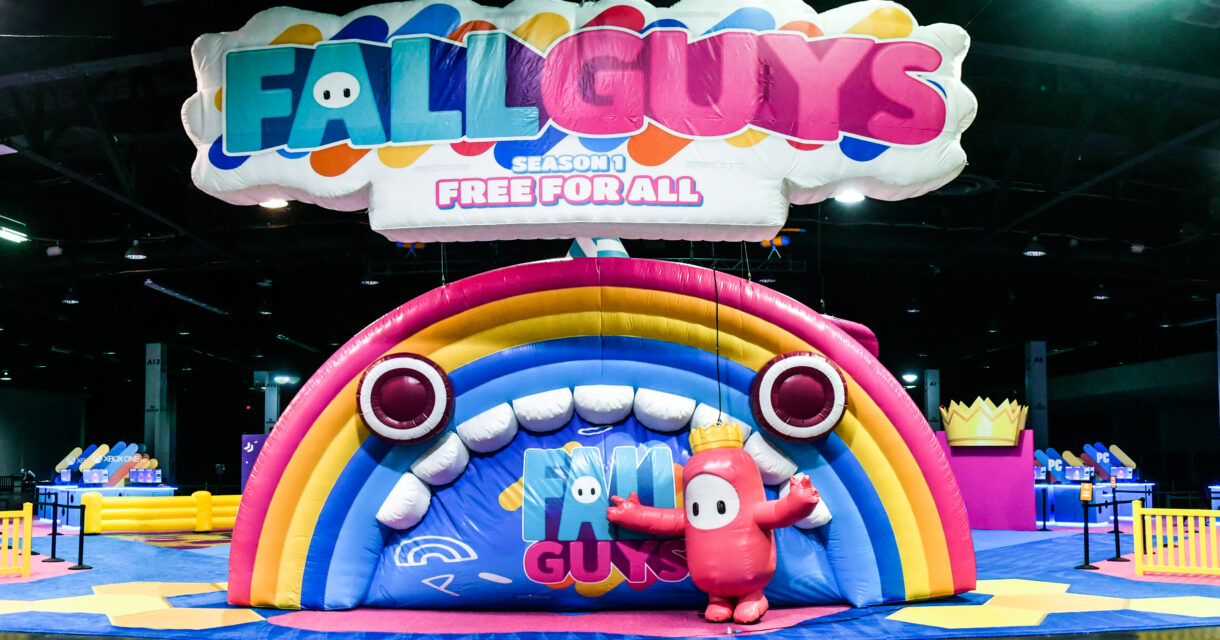 The Fall Guys: Ultimate Knockout Game Experience just wrapped up their debut at VidCon US 2022 and stole the show at this year’s event. The Fall Guys Experience was launched at VidCon right after making their game free to download/playon all platforms and launching on Xbox, Nintendo Switch, PlayStation 5, and the Epic Games Store. With its new public gameplay, the game is now welcoming more players to the Blunderdome for the race to win the tournament. As the Fall Guys Game blunders across the gaming industry, creators continue working hard behind the scenes to ensure that everyone enjoys the same great Fall Guys experience no matter where you play.

The celebration continued as Fall Guys highlighted their free-to-play features and presented their experience at VidCon 2022, where Epic Games showcased their Fall Guys Experience booth for all attendees. The booth featured a collection of activities to indulge in, including eight console towers, a vast green screen backdrop that animates you falling down the Blunderdome, large digital screens to enjoy, and multiple photo opportunities with the Fall Guys characters. At this year’s VidCon 2022, FGPG is proud to have partnered with Mediatonic to present the knockout booth. We will walk you through the world of Fall Guys as we dig into this build’s details and share insight into the booth’s awe-inspiring look and immersive experience.

VidCon 2022 saw a staggering amount of attendees at the show, making the event a hit. Entering the show took some patience, but once you enter the world of online creators, you are ready to discover the latest in online and video content. As you make your way to the Fall Guys Experience, the exterior view welcomes you with a collection of Fall Guy’s inflatables that are seemingly spread out throughout the booth’s space. The front entrance consisted of an enormous inflatable backdrop, allowing attendees to take a snapshot with a Pink Fall Guys character. Upon entering the Fall Guys Experience, you’re immediately transported into the Fall Guys Blunderdome, where you are met by a collection of Fall Guys Themed inflatables, several activities to immerse in, and Epic Games professionals greeting you. With so many options, attendees can walk the floor to participate in the experience and play on one of the gaming islands. On each of the four corners of the Fall Guy Experience space, you will encounter two console islands for a total of eight gaming areas, where attendees can have a live game experience for a chance to win the tournament and broadcasted on the big screen. The gaming islands featured Xbox or PS consoles to select from, but fortunately, Fall Guys is now cross-platform. You can now battle it out for the crown, despite your choice of console. As mentioned previously, the consoles included are Xbox, PlayStation, Nintendo Switch, and PC.

Here’s how the gameplay works: 60 players have to compete over a series of obstacle courses, and only some of them will make it to the next round. On the final challenge, the last surviving competitor is the winner. Some courses are rampage races across bouncy-castle landscapes, where sliding doors and swinging boulders knock unwary sprinters into the abyss; others throw players into a game of football. A disruptive challenge where you have to steal other players’ tails is a bit like the children’s party game where you all have balloons tied to your ankles and must stamp on everyone else’s. One of the most interactive components of the Fall Guys Experience is the green screen falling animation backdrop. Here, attendees enjoyed shooting a scene of themselves falling down the Blunderdome. Strike the pose, enact a falling movement, shoot the scene, and then Epic Games assistants animate you into the world of Fall Guys as you plunge down the Fall Guys course. To conclude the falling experience, you will receive a text with an animation of yourself falling down the course!

As TikTok is the new sponsor of VidCon, this year’s event welcomed TikTok stars who walked the floor to greet fans and experience the event itself. The Fall Guys Experience was a hit with TikTok stars as they captured themselves indulging in everything that Fall Guys had to offer. Millions of followers could see the booth firsthand from the creator’s videos as they shared their experiences with all of their fans live from VidCon 2022. TikTok and YouTube creators consisted of the following below: